Description: Slightly smaller than rats and with a blunt nose, rounded ears, with brown glossy fur; a fur-covered tail about half the length of the body.,

Lifespan: Most live less than a year but can be up to 2 years. 18 months Very few survive two winters.

Breeding: Three or four litters produced from March or April (or later if cold) till late summer. Usually about five young per litter. Some early litters may breed later the same year but normally during the next.

Habitat: Riparian fringes of brooks, pools and other water bodies; also occurs in other wetland, marshland and occasional terrestrial habitats although the latter have not been recorded locally.

Origin & Distribution: Water voles colonised Britain from the continent after the last ice age. The water vole is a secretive semi-aquatic species which was once widespread in Britain, but although locally common, they are now absent from significant areas of the country including the southwest of England and much of south Wales.

Diet: herbivorous consuming a wide variety of plants with over 250 different plants have been found in their feeding remains

General Ecology: Water voles live in colonies but tend to space themselves out along the water’s edge. A breeding female normally occupies 30 – 50 m of bank depending on the quality of the habitat. In winter they cease being territorial and live in larger groups spending most of the time underground feeding on roots and stored food, venturing out in milder spells. In spring they spread out to establish breeding territories. Although they will cross dry land, the connectivity of their aquatic habitat is important for this and to maintain a varied gene pool.

Conservation Status: Although native and locally common, water voles are vulnerable to extinction in the UK. They are a priority species in the UK Biodiversity Action Plan. Water voles and their habitat are strictly protected by the Wildlife and Countryside Act (1981) and cannot be killed, kept or sold (even stuffed specimens) except under licence.

Threats: Predation is a constant pressure and especially where colonies are isolated as a result of habitat fragmentation, can result in local extinctions. Habitat fragmentation has occurred as a result of development, drainage, canalisation, culverting, and poor bank management. The main predators include mink, foxes, stoats, weasels, owls, herons, pike rats, cats and sometimes otters.

Main recording methods: Water voles are seldom seen when surveying and trapping can only be done under licence. The main methods are the recording of field signs: feeding remains, droppings and latrines, burrows, tracks and footprints. Casual direct sightings are often useful in alerting us to the presence of water voles.

Typically, several entrances both above and below water level, 4 – 8cm diameter, without spoil outside, and sometimes surrounded by a “lawned” area of nibbled vegetation. When disturbed near the water’s edge the animals will dive into the water with a characteristic “plop” and then swim into the underground burrow entrance.

Dark green or brown in colour, cylindrical with blunt ends, 8-12mm long by 4-5mm wide, little odour and of a mushy consistency. Latrines of piles of compressed droppings are used by breeding females to mark their territories and are usually just above water level and separate from feeding remains.

Piles of cut vegetation. These are produced by felling reeds, rushes etc and chopping into 8-15cm lengths cut at 450 at both ends. Field voles produce similar piles, but the pieces are smaller and contain a higher proportion of grasses. 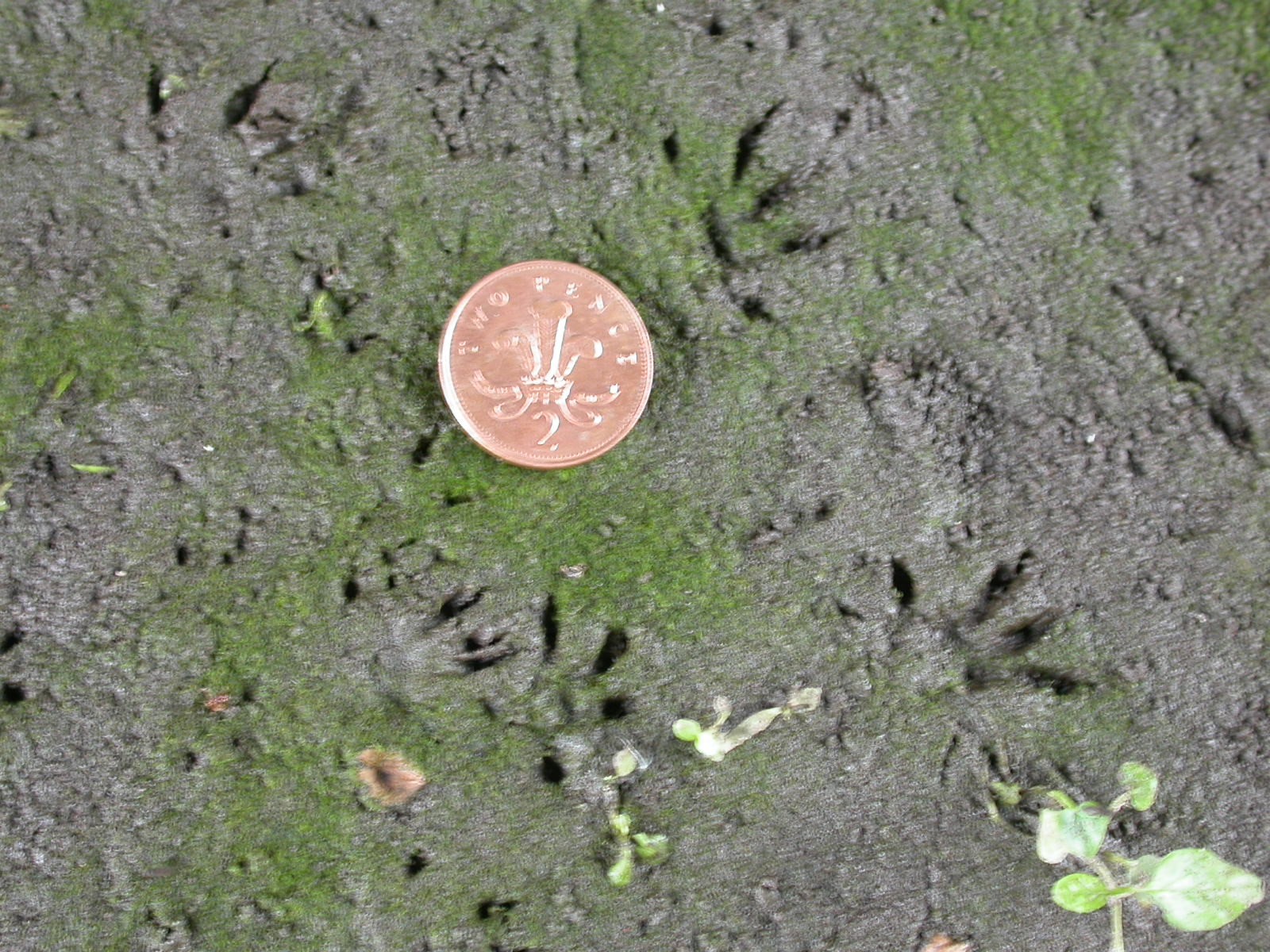 Although difficult to distinguish from those of rats, the presence of such prints on exposed mud is a useful indicator of recent activity and makes it worth looking for other signs to confirm their identity.

Regularly used routes can become quite definite tracks often found on ledges under overhanging bits of bank. In dense vegetation, tunnels can form. Tracing along these tracks will often lead you to other field signs.

Water voles have been known to hoard potatoes for winter use

Please get in touch if you know of any local names or stories about water voles.

Text and photographs: unless otherwise attributed, by Malcolm Monie.